skip to main | skip to sidebar

Over the weekend on 24th/25th October 2009 I attended Barcamp London 7 at IBM South Bank, London. This is a writeup of the weekend.

Originally I wasn't going to sign up for this event due to the very high demand for tickets, again going within seconds of the release time, but this time the Barcamp London planning team had tried a few different ways of releasing the tickets.

Now consdering I wasn't going to sign up at first, I thought this event would be far too good to miss, so I thought just for a laugh I'll put my name into the lottery draw and see what happens, If my name didn't get picked then so what there will be more in the future....

It was to my surprise that I recieved an email the following Saturday informing me that I had won a ticket, I sat there and thought "Now what?" as I wasn't expecting to get a ticket at all. I confirmed as I thought it'll be rude not to go down and booked a return train ticket (£80) for the weekend.

Saturday morning started far too early for my liking as it involved getting to Durham train station for the 4:45 train to London Kings Cross.

3 hours later I had arrived in London, the next challenge was to get from LGX to IBM Southbank with no knowledge whatsoever of London, The Underground or any streets for that matter. I worked out the Tube map and headed over to Waterloo Station using Victoria Line, then Bakerloo. As a first timer in London I was very impressed with the Tube and how quick it can be for getting over London in a short space of time.

I arrived at IBM (after asking 2 helpful PCSOs where it was, they then pointed out it was the buliding in front of me) around 8:50 which was far too early as the registration didn't open till 9:30, so I decided to play tourist for half hour and headed down to the London Eye.

Returning to IBM around 9:20 people had started to gather, for the doors opening. Doors opened at 9:30 and after checking past IBM security and handing my ticket over I had finally arrived at Barcamp London 7. The morning had been a complete blur till this point!

I caught up with a few people who I knew and started talking to few people I'd never met whilst grabbing a couple of coffees (sponsored by Starbucks). Once everyone had been signed in we then headed around to the large seating area for the opening talk given by Cristiano, Kevin and Melinda.

Following the opening talk people were placed into different rooms for a team building challenge: To build bridges...out of Lego, I think this worked really well as to go round a room of 200 people to get names and interests would have taken too long, but by doing it this way in small groups it was easier to remember names etc.

After the ice breaking session, the rush was then on to put sessions on the grid. 9 rooms were provided over the 2 days which allowed for an imense amount of sessions to be held. I didn't have a session prepared, but I had thought of a one during the train journey down which involved photographers rights in the UK. I thought it would be a good session to bring up at a London event as I had read previously that police officers and security guards etc had been hassling photographers in the city for looking "suspicious". I placed this on the Sunday grid as it would give me the Saturday evening and Sunday morning to put something together.

Sessions started around 12 noon, which included a session aimed at Barcamp newcommers to give them the low down on what the events are all about and how to get involved.

I decided to skip the first set of sessions as I was still getting myself sorted out and just chatting to other attendees.

Sessions I attended through the day:

#themineproject - "asocial" software. Use social software to interpret private sharing: The talk from Alec Muffet gave a demonstration of the project and how people can use and share information both privately and publicly using online data and relationship logistics. More information about the project can be found here: The mine Project.

Duck 365 - A year in the life of Mr Duck... Or a photography project gone very very wrong (Mr Duck and Alistair) by Mr Duck and Alistair: I've been following Alistair's Duck 365 project since it started now and it was good to see a talk given on the project, how it has evolved, the relationship between Mr Duck and the "Hippy" and where it all began. However this talk started a small theme for the weekend...Ducks (More on that later). 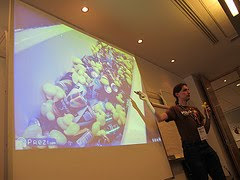 Stuff you shouldn't tweet that I have: Dominic Hodgson talked abit about himself and some of his blog posts which he has published. He also demonstrated some of the things you really shouldn't tweet about!

Google Wave WTF!: I've heard a lot of stuff about Google Wave and I just wanted to know what all of the fuss was about. The session revolved around people trying Google Wave live in the room, how we could make things better and how we could use it for the likes of Barcamp communities by using APIs etc.

Presenting time on the web (time, urls, linked data): Jonathan Tweed from the BBC talked about how we can present date and time in a variety of different ways and how we can use dates/times in URLs and with linked data.

Release London's Data - Feedback from #londonsdata: Unfortunatly I didn't really understand much of the talk as I think it revolved more around people living in the city rather than people living outside of it.

Balsamiq Mockups (Got some free licenses to hand out!): I have been looking into Wireframing tools recently and unfortunatly not found many free ones out there. You have to pay for Balsamiq, but it is relativly cheap and it looked a decent product. Cristiano gave a brief talk and demonstration about the basics of the software and how designers and developers can liase with one another and the clients.

Sex and other things we don't talk about. Ian Forrester from BBC Backstage held an open discussion about why we don't talk about sex and other such things in day to day life. Some interesting questions were brought up in this session inluding "If you asked to produce a website of adult nature by a client, would you turn it down?". The discussion also included the recent happenings with Yahoo and the Open Hack day in Taiwan.

During the evening a number of games were held in the communial area, these included Werewolf, Munchkin, Carcassone, and a LAN game organised by Dom. It was nice just to sit back and chill out after the day full of sessions. Most of the night I just hung around and talked to Alistair, and Caz also taking a few photos inbetween. Pic & Mix was provided and Pizzas were ordered in around 1am.

One thing which turned out a bit of a coincidence at this event was the changing of the clocks. At Barcamp London 6 earlier in the year, the clocks went forward an hour. At this Barcamp they went back an hour.

By the end of the weekend, a theme was running through the Barcamp and that was ducks. Earlier in the day, Alistair had presented a session about his Duck365 project and after this ducks just took over the IBM building. Plastic ducks were turning up everywhere, in the plants, around the lego and even in the toilets. Alistair got rather freaked out by all of this and everywhere he looked there seemed to be a duck!

I finally dragged myself to a floor for some sleep around 2:30am as I was on my last legs after being up so early on Saturday morning back at home.

I managed to get a good couple of hours sleep on the carpeted floor (A lot more comfortable than Barcamp Brighton) and woke up around 5:30. I grabbed a coffee, got changed and set about putting my presentation together for later in the day.

Whilst having breakfast later in the morning, I processed and uploaded the photos from Saturday to Flickr whilst waiting for the Sunday sessions to start.

Sessions I attended through the day:

Mono: Running .NET on Linux/Apple/*NIX: This talk revolved around what Mono is and how we can use it to run .Net on Linux /Apple and *nix platforms.

Polishing a turd: This talk, given by Adrian Long gave ideas and what we can do when inheriting a monstrosity of a web project which you arn't allowed to start over. Tips were given for not just when you get bad code, but bad Information Architecture, bad UI, and bad ideas.

Growing the Developer Community: How can we get more people, more events, more conversations - and less confusion? - Dylan Beattie had paired up with Sebastien Lambla for this talk. They talked about LonDev an Information source for software developer community events in London. They also talked about the likes of AltNetBeers and other ways and means of getting the geek community involved.

Developer Happiness: This was an open discussion by David Flanders about what makes developers happy either at home or in the work environment.

Lightning Talks: A number of 5 minute sessions including Dabbr, Travel Expense Calculator, Retro Hacking, Mobile Wikipedia without the Internet and MyFi via IPhone.

Teach Me How To Run A New BarCamp - Cultures, Languages (BSL): A very interesting session about running a Barcamp for the deaf community. What is needed and the best way to go about things.

Tom and Dom's Big Quiz - with ultimatly dissapointing prizes!: Tom and Dom's quiz spectacular with no spectacle guaranteed! Very funny and would suggest anyone to turn up to this at future Barcamp events.

After the quiz had finished, the closing speech was then held, Cristiano thanked everyone for such a great event, he also thanked the organisers and the sponsers.

A massive thank you and a big shout out should go to the following people and sponsors for such a great weekend of fun.

Some people have already blogged about this event, and you can find them here:

Photos of the event have also been uploaded to the London Barcamp Flickr Group.
Posted by Martin Cunningham at 11:18